The former Scotland international has been hailed as a “true soldier” of the sport, with clubs across the country sending their condolences.

“Newtonmore Camanachd Club led the tributes to Andy, who followed in his father Iain’s footsteps by playing for his hometown team,” Daily Record reported.

From the Daily Record:

The club took to social media to share touching photographs of the defender, who captained the team to a Camanachd Cup and MacTavish Cup double in 2018, and his young family over the years.

Alongside the pictures, the said: “There literally aren’t any words to convey our feelings at the Club today. For now we will let these precious pictures do the talking.

“Our love, prayers and every waking thought are with Megan, Marnie, Hadley, Iain, Christine, Alison, the Mackintosh family and all of Andy’s many, many friends, we send our deepest condolences to them all.

“A shining light has been taken from us, from the shinty world and from our community.”

Andy’s fiancée shared a moving family photograph on social media and said: “Thank you all for messaging. I can’t even put into words. He will be loved and missed by so many.”

The club stated on Facebook: “The darkest of shadows has been cast as Andy’s bright light has gone from us, the shinty world and our community.”

Shinty commentator Hugh Dan MacLennan wrote that “there are no words which can be of comfort”.

“I cannot recall the shinty community ever being tested like this in my lifetime,” he said. “It is an apparently endless list of good people taken far too soon.”

Rival shinty clubs from around Scotland replied to the post to send their condolences at the shock news. 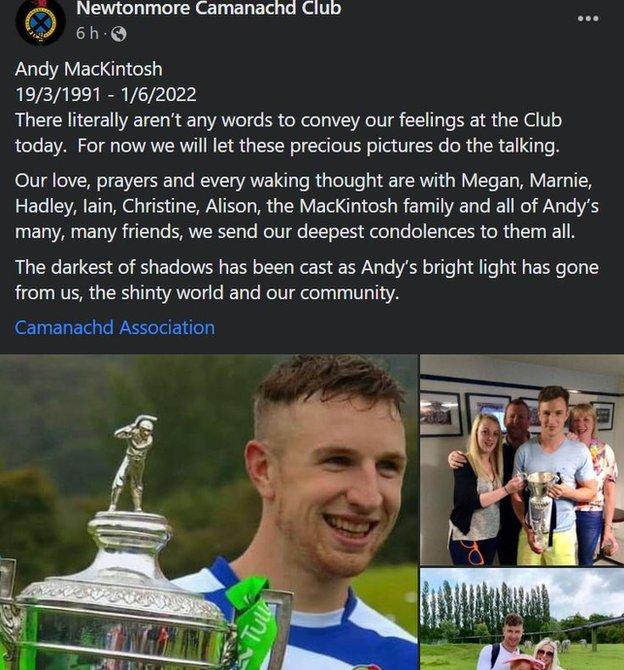