Moderna CEO Stephane Bancel said on Thursday people will likely need a COVID-19 booster by Fall 2022 to increase their protection from the virus.

Some COVID-19 jab recipients haven’t received the third shot, and Moderna’s CEO is already pushing for a 4th dose.

Bancel admits his company’s injection will lose efficacy over the next several months, and another shot is needed by winter 2022.

Unless people say no, it appears Moderna customers have entered the lifetime booster prescription model to enrich the pharmaceutical company.

Already talking about the 4th shot when most people haven't had the 3rd? 4 shots in one year to help ,"protect" you from a virus with a 99% survival rate? Who would be stupid enough to do this?
https://t.co/arHREcVLeP

Moderna CEO Stephane Bancel on Thursday said the efficacy of boosters against Covid-19 will likely decline over time, and people may need a fourth shot in the fall to increase their protection.

Bancel said people who received their boosters last fall will likely have enough protection to get them through the winter, when new infections surge as people gather indoors to escape the cold.

However, Bancel said the efficacy of boosters will probably decline over the course of several months, similar to what happened with the first two doses. The Moderna chief was interviewed by Goldman Sachs during the investment bank’s health-care CEO conference.

“I will be surprised when we get that data in the coming weeks that it’s holding nicely over time — I would expect that it’s not going to hold great,” Bancel said, referring to the strength of the booster shots.

An unprecedented surge of infections from the highly contagious omicron variant is currently spreading worldwide. In the U.S., the seven-day average is now more than 574,000 new cases daily, according to a CNBC analysis of data from Johns Hopkins University.

Bancel says that the United Kingdom and South Korea have already begun ordering the fourth round of shots.

“We have been saying that we believe first this virus is not going away,” Bancel said. “We’re gonna have to live with it.”

Moderna said last month that a booster dose of its COVID-19 vaccine should offer protection against the rapidly spreading omicron variant.

A recent preprint study from Denmark indicated recipients of an mRNA COVID-19 jab series would have negative efficacy from the omicron variant after 90 days.

E against Omicron was 55.2% initially following primary BNT162b2 vaccination, but waned quickly thereafter. Although estimated with less precision, VE against Omicron after primary mRNA-1273 vaccination similarly indicated a rapid decline in protection. By comparison, both vaccines showed higher, longer-lasting protection against Delta. The negative estimates in the final period arguably suggest different behaviour and/or exposure patterns in the vaccinated and unvaccinated cohorts causing underestimation of the VE. This was likely the result of Omicron spreading rapidly initially through single (super-spreading) events causing many infections among young, vaccinated individuals.

A recent study from England (in preprint) found higher effectiveness against symptomatic Omicron initially after BNT162b2 vaccination followed by a rapid decline in protection, and that VE increased to 75.5% (56.1 to 86.3%) two weeks after booster vaccination using unvaccinated individuals as comparison.

Our study contributes to emerging evidence that BNT162b2 or mRNA-1273 primary vaccine protection against Omicron decreases quickly over time with booster vaccination offering a significant increase in protection. In light of the exponential rise in Omicron cases, these findings highlight the need for massive rollout of vaccinations and booster vaccinations. 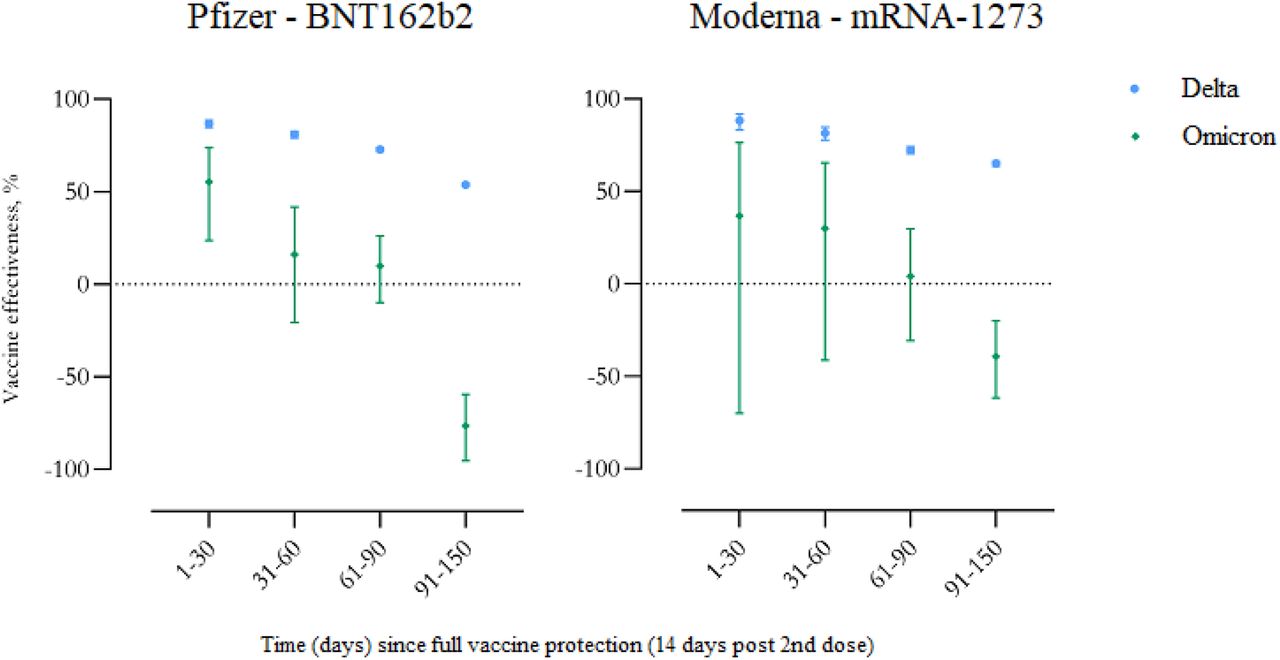 Of course, their brilliant option to combat the waning protection is more boosters to annihilate your innate immune system even further.

It shows that Moderna is following the $cience.